Known for its natural landscape and rich nautical history, Coastal Maine is also special for its lighthouses. In fact, 65 of them are spread along the 5,000 miles of coast, inlets, and islands. It’s no wonder why people refer to Maine as “The Lighthouse State.”

With varied shapes and sizes, the towers offer great opportunities for exploration and education. When you’re exploring the best lighthouses Boothbay Harbor Maine has, you’ll need to take a boat to see many of them. The trips are always worth it because other activities are often available nearby.

When you’re in Boothbay Harbor and search for “lighthouses near me,” Hendricks Head Lighthouse in West Southport will be in the results. This active U.S. Coast Guard tower is privately owned as of 1991.

The original lighthouse was built on the roof of a granite keeper’s house in 1829. It stood 39 feet above the water at the eastern entrance of Sheepscot River. However, the current brick tower replaced the original in 1875. Then, a fog bell tower was built in 1891 and an oil house in 1895.

You can see Hendricks Head Lighthouse from a small West Southport beach. The closest view that you can get, though, is on boating adventures that depart from Boothbay Harbor and Bath Maine.

In your search for “lighthouses near me,” Burnt Island Light will also be in the results. Part of Southport, this 5-acre island has an interesting history and is about one mile from Boothbay Harbor.

The active lighthouse was lit for the first time in 1821. You can learn about its history during the Burnt Island Living History Lighthouse Tour. Since 2003, this educational program has been held in the restored keeper’s dwelling. Interpreters in 1950s clothing portray the family who lived at the lighthouse. On top of that, you get to climb the winding stairs to the lantern room, go for a hike, and enjoy other family activities.

The tour is free for children 2 and younger, $18 for children 3 to 11 years and $28 for visitors 12 and older. You can hop aboard the Novelty, which is operated by Balmy Days Cruises, to get to the island.

Located in Southport as well, Cuckolds Lighthouse is an active station that was originally established as a fog signal in 1892. This made it one of the last lighthouses erected on the Maine coast. However, it was replaced in 1907 by the current 48-foot tower.

Interestingly, the lighthouse gets its name from a point of U.K. land on the Thames River. That land was awarded to a London man after King John slept with his wife. When the man moved to Boothbay Harbor, he named the pair of treacherous ledges at the harbor entrance The Cuckolds.

You can only access the lighthouse by boat. However, you can’t walk up the tower. You get the best views during sightseeing cruises, but you can also see it from the Southport public landing.

In East Boothbay, the active Ram Island Light was established in 1883. The 40-foot granite and brick tower is accompanied by a keeper’s house, barn, oil house, storage building, and cistern. It’s not open for tours to the public, but you can visit the grounds if you make an appointment with the Grand Banks Schooner Museum Trust. Otherwise, the best way to see it is via adventure cruises from Boothbay Harbor or Bath.

When you’re sightseeing the lighthouses Boothbay Harbor Maine has, you’ll notice that there are many more outside of the immediate area. Pemaquid Point Lighthouse in Bristol, for example, is maintained by the Bristol Parks and Recreation Department. It has turned the area into an educational and recreational experience.

From Memorial Day to Columbus Day, you can explore the lighthouse tower if the weather is favorable. There’s also a keeper’s dwelling, bell tower, and oil house. The park grounds feature the Fisherman’s Museum, Learning Center, and Pemaquid Art Gallery as well. There are even picnic tables. Entrance into the park is $3 for visitors 12 and older.

The active Doubling Point Light in Arrowsic is a wood tower with a granite foundation. It stands 23 feet high on the northeast side of Arrowsic Island along the Kennebec River. There’s a keeper’s dwelling, oil house, fog bell tower, and storage building on the premises as well.

Since it’s a private residence, the grounds are open to the public, but the keeper’s house and lighthouse are not. If you visit the grounds, keep in mind that there are only two or three parking spaces. For that reason, boat tours from the harbor are the best way to see it.

Also located in Arrowsic on the Kennebec River, Squirrel Point Light lies at the end of a ⅔-mile trail near Bald Head Road. There’s a well-marked footpath through protected wetlands and forests to guide you to the property. Since some of it is rough and uneven, the walk can take 20 to 30 minutes.

While the grounds are open to the public, access to the active lighthouse is not. Also, keep in mind that there aren’t any restrooms. If you don’t want to walk to the property, you can see it from Phippsburg across the river. The best way to view the station, though, is to join a Maine Maritime Museum cruise from Bath.

In Georgetown, Perkins Island Lighthouse is a wood tower with a brick foundation. This active, 23-foot light was built in 1898 along the Kennebec River on Perkins Island. There’s a barn, keeper’s house, boathouse, oil house, and fog bell tower, too. Although you can’t explore the grounds, you can see the lighthouse and other buildings from boat tours or from Phippsburg across the river.

The Monhegan Lighthouse is located on Monhegan Island. Balmy Day Cruises and other companies offer adventure cruises to the island. However, you won’t be disappointed with all of the things to do when you get there.

The active, 47-foot tower is made of granite and is located almost in the center of the island. Maintained by the Monhegan Historical and Cultural Museum Association, it was originally established in 1824 but rebuilt in 1850.

Among other buildings on the grounds, the reconstructed keeper’s dwelling houses the Monhegan Museum of Art & History. All of these buildings are open to the public from late June through September. The tower is only open for tours twice a week when the weather allows.

If you want a central location for visiting the best lighthouses Boothbay Harbor Maine has, Flagship Inn & Suites is the perfect spot. We’re located near some of the best boat tour and rental companies that offer lighthouse sightseeing tours.

On top of that, we provide top-notch amenities and are in close proximity to many delicious Boothbay Harbor restaurants. 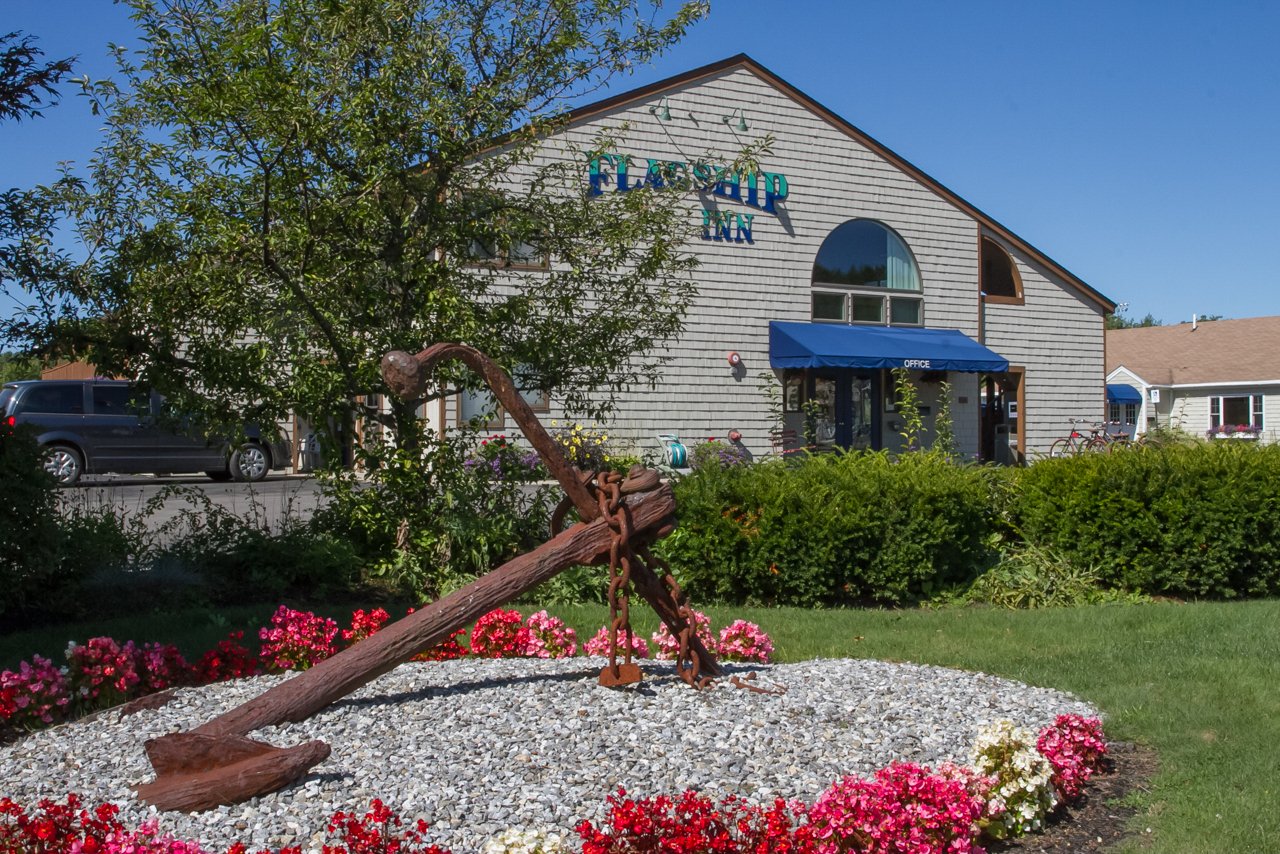